Almost as good as Oprah's book club or the Prime Minister's summer reading list, we're once again bringing you recommendations for holiday reading from around the Studiosity office.

This time, we're focusing specifically on Kindle eBooks that we've been reading recently.

Enjoy the festive season with a good book - or ten! Reading ebooks is an easy and environmentally friendly way to absorb tonnes of knowledge, keep your brain entertained, and improve your vocabulary while you're at it.

We hope you like these as much as we did. 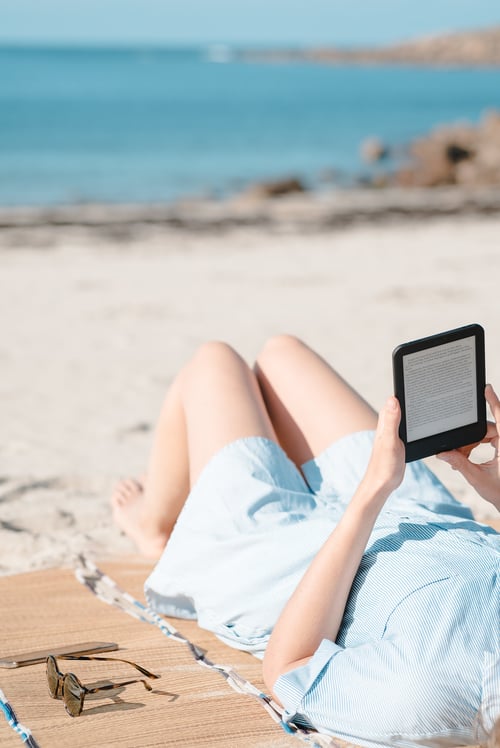 How To Fix The Future, by Andrew Keen
(Recommended by Jack Goodman, Founder)

Populism is on the rise around the world, and it's part of a backlash against the unprecedented levels of inequality that our tech-driven economies are generating. (In case you missed it, the co-founders of Atlassian (both in their 30's) have just bought the Fairfax family's historic estates on Sydney harbour for a collective $170-million.) Atlassian is big and powerful, sure, but it's a piker compared to Amazon, Google and Facebook, all of which are as big as some countries and certainly more powerful in many ways. This book offers a prescription for reigning in some of the power of these digital behemoths in order to protect our democracies and our personal freedoms. It uses as a framework the "trustbusting" work of people like Teddy Roosevelt, who oversaw the breakup of the big industrial monopolies of the 19th century. (Standard Oil, for example, was the empire build by John D. Rockefeller, and it was broken into 37 separate oil companies.) It's a good book, and it gives me a newfound appreciation for the bureaucrats in Brussels and why they're fighting so hard against Silicon Valley.

Warren Mundine's book In Black and White is an inspiring story of one man's mission to improve outcomes for his people. Mundine's focus on personal accountability and empowerment hasn't always made him popular, however his honesty, courage and tenacity are an inspiration to all Australians.

(Recommended by Dermot Duffy, Marketing Manager, UK)
Since I had such a long journey back from Sydney a couple of weeks ago, any reading material I could get hold of was helpful. I downloaded quite an eclectic mix, from Stephen King's On Writing  to James Joyce's Ulysses (this book is my Everest).
However for best value, and easy reading, I recommend The Complete Sherlock Holmes... a whopping 64 novels and short stories for £0.49p ($1.10) :)
It will take a lot more air miles to get through all that!

The story of an environmental lawyer, Abby, returning to her small hometown after 10 years to investigate a large corporation up to no good, this suspenseful thriller is well-written and  enjoyably paced. It's Ritter's debut novel (and she's better known for her acting career - star of Jessica Jones and Breaking Bad) but she doesn't disappoint, delivering a strong female lead character to root for, and a plot that is packed with anticipation and made me compulsively 'turn the pages' (kindle edition: tap the pages?). Definitely a holiday-worthy read as you can rip through it quickly and still have plenty of time for all the other books on this list!

My Brilliant Friend, by Elena Ferrante

(Recommended by Mona Pradella, Marketing Director)
My Brilliant Friend is the story of a tumultuous friendship between Lenu and Lila, two girls who grow up in Naples in the 1950/60s. It's a friendship characterised by the struggles of living according to the previous generations' views of how their lives should unfold. Ferrante describes their competition as well as love for each other from the perspective of Lenu, a hard-working student who learns a lot from her 'brilliant friend' Lila, whose intelligence seems to represent a burden rather than an asset to her life. I like how Ferrante tells the story using small happenings or everyday encounters that wouldn't be considered 'important' enough in today's often fast-paced and quick-to-escalate story telling. Despite, or maybe exactly because of this, you don't want to put it down, and keep following them through the streets of Naples, to find out how their friendship and lives develop. This book was released in 2012 as the first in a 4-part series. So, if you like it, there's more to delve into!

They're a Weird Mob, by Nino Culotta

This is a weird - and wonderful - book. A comedic love letter to Australia in the 1950s "written" by an Italian immigrant freshly arrived in Sydney. In fact, it's a hilarious read written by an Anglo-Australian pharmacist who was bored out of his gourd counting tablets all day and who bet his boring-as-anything professor uncle he could write a better book. 3-million copies later, it's clear who won.
They're a Weird Mob turned into a best seller and then, apparently, an awesomely hilarious movie. (Brendon, please let us know what you think of the pic.) It's a lot of fun to read and gives us "new" Australians an insight into life as a builder's labourer in western Sydney in the 1950s. Highly recommended.

(Recommended by Stephanie Saunders, Marketing Manager, APAC)
Mort is a satirical comedy about how Death takes young Mort from the fields and teaches him to collect souls, so that Death can take a holiday to experience human pleasures. In Death's absence, Mort prevents an assassination and needs strong magic to repair the rift in history.
It's my favourite Discworld novel, but all of them are worth a read!

(Recommended by Brendon Low, Software Engineer)
For lovers of both alternative ancient history and action films, this book starts the series of currently 5 books. Having read each of them at least 3 times, this one managed to maintain my attention whilst encouraging me to read for hours. Basically, it is a non-stop action fiction that centralises around a hero figure, mixing both modern and ancient realms in a 'save the world' epic. If you enjoy the concepts in Dan Brown's Da Vinci Code or Angels and Demons, this book is like that but with way more action!
And...

The first book I read by this author and I couldn't put it down! The first of 5 books in this series, it's again based around a hero figure trying to save the world. My main attraction to these stories apart from the thrilling action writing is that they depict an ideal, who by way of his nature and morals, becomes a hero who saves the world. There is nothing particularly super-human or special about the main character but by virtue of his actions, he becomes a legend.
If you like action stories, just read them and if you do, let me know so we can talk about how awesome they are!

This is an insightful book that interviews product leaders from a variety of successful companies at varying stages of growth and provides insights into:
I've found it a very relatable read, and full of useful nuggets. There are a few books recommended within this book that I am going to move on to next.
You might also like: Christmas Holiday reading: Our Recommendations
from 2017.
Subscribe to our quarterly brief for educators