Is ignorance power? The constant confusion of Homo Deus In his equally fascinating and slightly depressing way, Yuval Noah Harari tells a Brief History of Tomorrow in his future-oriented sequel to Sapiens, Homo Deus (2017). 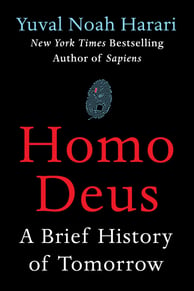 In Sapiens, Harari analysed the cognitive and physical development of humankind until today. Now, he envisions how societal developments alongside technological advancements of the ongoing ‘digital revolution’ will take us to the status of ‘god-like’ (Deus) humans in the next few decades.

How will artificial intelligence influence our everyday lives? And when will we be able to order our bioengineered children on the internet? Soon, he says.

Harari predicts that a human life’s individual value will ultimately vanish. Due to the rapid advancements of the digital revolution, our cyborg selves will be sucked deeper into the online world and turned into faceless data.

Why? Because “Dataism” is our 21st century religion. We are willing to share every detail of our lives on Google or Facebook and give them more power than ever before by knowing us, and our every move, better than anybody offline.

After evolving into 21st century homo sapiens, having survived famines and wiped out many life-threatening diseases, Harari asks if there are just not enough other issues to worry about anymore?

It’s true, we do have somewhat different problems now than 250 years ago. Like which funny cat video to watch next.

I find myself in a state of (dis)agreement. With the rising amount of ‘fake news’ and misinformation, we seem to live in an era of constant confusion. In the race for who-gets-more-clicks, the media shows us what we want to see, as do Facebook and Google, due to their thoughtfully programmed algorithms. Will there ever be a time when the balanced ‘two sides to every story’ become the norm?

“In the past, censorship worked by blocking the flow of information. In the twenty-first century, censorship works by flooding people with irrelevant information. People just don’t know what to pay attention to, and they often spend their time investigating and debating side issues. In ancient times having power meant having access to data. Today having power means knowing what to ignore.” It’s not a new theory in cognitive psychology that people prefer to consume facts and ideas that align with their existing beliefs, rather than opinions that challenge their beliefs (it's called “reinforcement theory” in media psychology).

Is the world spinning too fast for us to adjust? Shouldn’t we be ‘in charge’ as Homo Deus - the most powerful mammal on this planet?

It all comes down to educating each other about different points of view, and finding information that isn't consumed only because it's most convenient to me, or of low risk to change my pre-existing believes of the world.

We should use our 'god-like' powers, such as being able to produce, share and circulate our own opinions like never before, to learn the skill of adapting to change. This is the foundation to influence change - and this is easier than ever before through our digital and technological evolution.

We just need to figure out how to enhance the development of the skills that enable us to filter and analyse the incredibly large amount of information out there, so we can adapt to an ever-changing world. And not let watching funny cat videos replace our curiosity to find out what else is going on in our increasingly digitally explored universe.

Our bioengineered children will thank us. I just have to do this...SHE'S DOING THE MACARENA!  Source: Quotesnhumor