Stand Aside, Robots: The Future Is Human 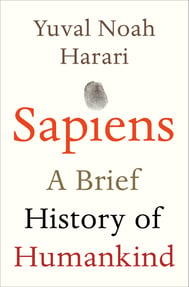 Every time we talk about Sapiens here at Studiosity HQ1, we come back to the debate: is it just depressing and dystopian, or could it be enlightening for education?

Despite some side effects from reading the book (like mild insomnia and an acute existential crisis), I’m in the latter camp - and determined to find a hopeful message in its condensed 400-odd pages.

Sapiens is a controversial and compelling ‘brief history of humankind’, taking us on the entire evolutionary journey of our unique species.

“A lot of people told me they hated history in school because it was just boring lists of dates of battles and kings: things they felt had absolutely nothing to do with their lives. But reading Sapiens has made them realise that the way we live, down to the most trivial details—what our houses look like, what timetables we keep—is the result of historical processes”.2 A perfect occasion to bring in 'Bad Joke Eel'. Boom tish. But seriously, history is about the skills and society of humans today, not in the past.

The author, Dr Yuval Harari, a historian and Professor at the Hebrew University in Jerusalem, has also made the entire book available as a MOOC on his YouTube channel, originally distributed through Coursera.

So, what is he trying to teach us?

According to the book, a series of revolutions set Homo Sapiens apart from other apes, and put our species on the fast-track to ‘world domination’.

It all started with a Cognitive Revolution 70,000 years ago - a genetic shift which bestowed upon Sapiens the ability to cooperate flexibly and at scale through shared ideologies. Humans have since woven together an amazing, complicated network of stories, or ‘myths’ (justice, money, freedom, equality, hierarchy...) enabling us to multiply, manipulate the world, and affect change at a previously impossible scale. Humans are good at constructing big stories (money, happiness, justice), and these stories give momentum to change.
(Image: The Matrix, 1999)

“Storytelling is our speciality. It’s the basis for everything we do as a species”.
Excerpt from Sapiens

The revolutions (cognitive, agricultural, scientific and biotechnical) drive us relentlessly forward and land us in the present, where Dr Harari questions the true meaning of ‘happiness’ (another human story) and whether we’re now better off.

We now live in a time of constant, fast-paced flux and change; cultures shift and evolve even within one generation, and we’re experiencing a data and (mis)information overload.

Although Sapiens paints a somewhat bleak picture of our future (spoiler: it predicts the extinction of our species within the next 200 years), perhaps it can teach us something essential to our survival.

Perhaps change is the only constant.

How? Human myths  - such as equality - ensure we are eternally adapting and reaching out for something. The fact we know it's a myth, a story, doesn't matter, because the eternal reaching means constant change, adaptation, and revolution. This is the search for the new; this is education, and in a time of social disruption, we fight even harder to find new skills.

“Just as when two clashing musical notes played together force a piece of music forward, so discord in our thoughts, ideas and values compel us to think, re-evaluate and criticise. Consistency is the playground of dull minds.”
Excerpt from Sapiens

Revolutions come and go, but it's how we leverage technologies, and how our own core skills adapt, that matter. The more we use our unique ability to collaborate, communicate, reason and educate, the better off our species will be.

And so maybe there's a bright future, after all.

New economy: People will still need a purpose and the most valued things are those that only people can do. @AmbBleich #UAConf2017

1 Sapiens also fuelled the conversation at this year’s Tertiary Leadership dinner, hosted at Courgette in Canberra, on the eve of the annual Universities Australia conference.

2 From an author interview with thebookseller.com