What's the deal with Adventure Time? A parents guide

“With Jake the dog and Finn the human, the fun will never end, it’s adventure time!”

Adventure Time is one of the most popular cartoons out there. With its iconic characters and neat visuals, it’s instantly recognisable. Any store that sells products to kids is guaranteed to have some Adventure Time branded gear somewhere. But is it good, clean fun? Does it teach good lessons, or is it just the fast-food of the television world?

The short answer is: Yes, it’s fine. It’s more thoughtful, kind and interesting than most things out there. The long answer is slightly more difficult. Adventure Time can certainly be viewed as a very typical kids show. The main characters are Finn, a normal 12-year-old human, and Jake, a talking, shapeshifting dog.

They inhabit the world of Ooo, a chaotic wonderland of sentient cupcakes, infinite trains and an alarming number of princesses. Each episode, Jake and Finn go on an adventure, and fun is generally had.

If you have a child, the chances are you recognise these guys

Where the show gets a little unusual is in its subject matter. The world of Ooo is heavily implied to be a post-apocalyptic earth after some magical war, which is used as justification for the show’s bizarre characters and locations. While the show is super fun, there’s an air of confusion and tragedy to everything, exemplified in the character of Ice King. While Ice King is a rather traditional villain (kidnapping princesses with his army of evil penguins), it’s slowly revealed that he was once a great scientist, who lost his mind trying to prevent the tragedy that befell Ooo. 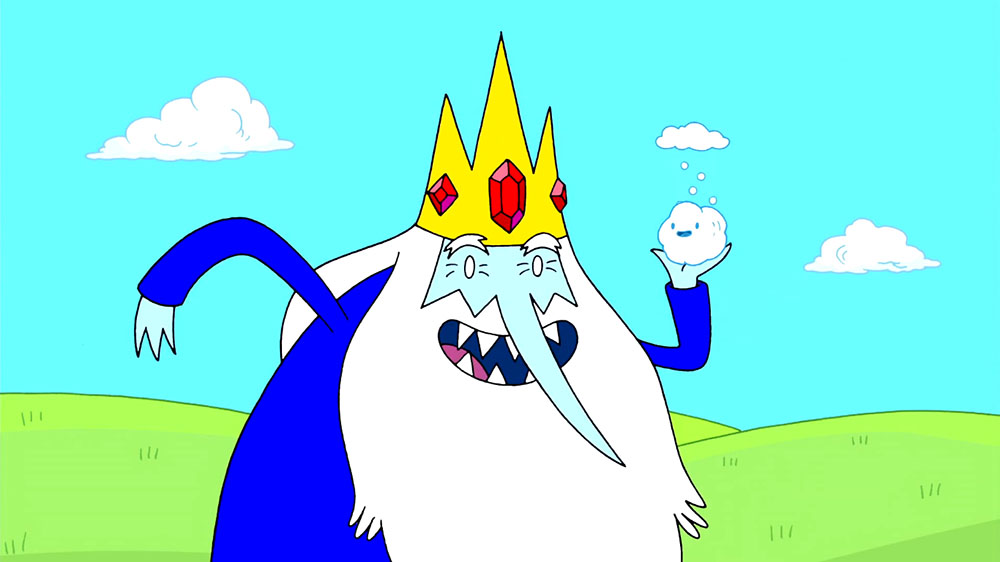 Lovably incompetent to heartbreakingly tragic. Pretty heavy for a show with talking muffins.

The individual episodes are about 12 minutes long, and usually follow Finn and Jake, but occasionally are told from the point of view of a side character. The stories are often fragments, starting or ending abruptly, as if the viewer is simply following whatever part of the story fits into the episode’s time frame. This is occasionally a little unsatisfactory, but often leaves me staring at the credits, thinking over what I just saw.

As far as themes go, the show’s both very mature and very timely. The female lead Bubblegum Princess is often the voice of reason to Finn’s childish nature, but as the series go, we begin to see that “BP” has more than a subtle streak of the callous tyranny needed to run a joyous kingdom. Ice King’s treatment of women is lampshaded, and Jake’s carefree attitude is shown to be a liability as much as it is funny. There is some violence in the show, but it’s all either over-the-top and cartoony, or depicted as unpleasant and undesirable. Few episodes have an overt “lesson” but the show strongly reinforces the themes of honesty, friendship and the value in showing kindness to everyone, regardless of whether you agree with them or not.

There are hundreds of characters, but Marceline the Vampire Queen and her electric guitar are my personal favorite.

Overall, I thoroughly recommend Adventure Time. It’s funny and has a good heart, and makes you think, which is more than I could ask for a cartoon about a boy and a talking dog. There’s roughly a bazillion episodes out, but it’s lightly rewarding to start in Season 1 and watch them in order, as new characters and arcs are introduced as time goes on. Enjoy.