Today is a sad day, as it marks the passing of Sir Terry Pratchett. To call him an author is to barely scratch the surface.

He wrote over 70 books, more than 40 of them in the famous Discworld series. He sold over 40 million books, many of which have become cartoons, stage productions and movies.

The Discworld series is my favourite series of books by a mile. The magic of the series is that it looks at many aspects of humanity, all contained within the one fun universe. The first two books ("The Colour of Magic" and "The Light Fantastic") star Rincewind. The books parody typical fantasy adventures by having Rincewind possess no heroic features what-so-ever, other than the ability to run away very quickly, and a gift with languages (so he could know precicisely when to start running).

So it went for all his books. Commander Vimes starred in books about law, order, mystery and morality. Granny Weatherwax headed books about the stage, theatre, Shakespeare and psychology (or "head magic" as she'd say).

They were also the first books that made me laugh out loud. I remember reading 'Night Watch' on the train, giggling while the whole carriage stared at me. 'Night Watch' is an interesting book, because the topics it covers (revolution, dictatorship, and corruption) are not funny at all. Instead of making jokes about serious topics, Pratchett instead satirises human folly and uses levity to contrast the serious nature of the plot.

I asked people in the office which book was their favourite. 'Wyrd Sisters' and 'Mort' both came up, along with 'Reaper Man' and several others. Everyone has a favourite, and that's the genius of Pratchett; there is a character or story for everyone, something that hits a fundamental truth close to your heart. 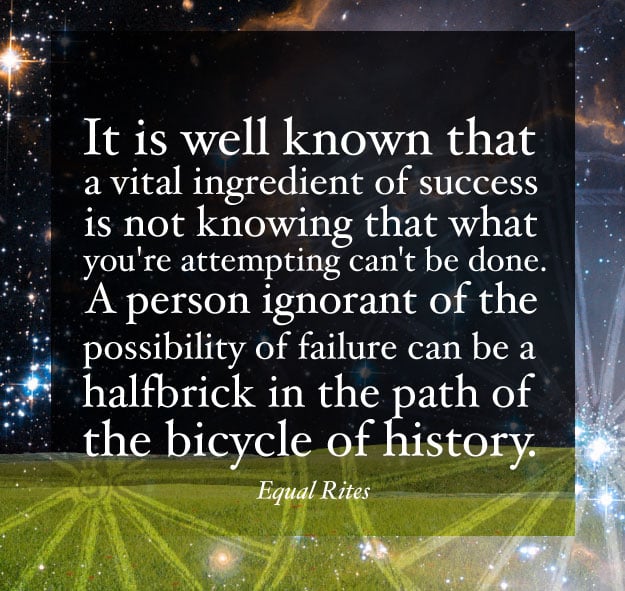 "...Commander Vimes is more concerned about the crime that’s happened. He’s got to find out not only whodunit, but howdunit too. He’s not even sure what they dun. But as soon as he knows what the questions are, he’s going to want some answers."

Vimes is my favourite character, as he's a great role model about what it means to be a good person, and how to better society by one's own actions. The book has hints of Sir Arthur Conan Doyle, and a generous helping of characters and ideas well-established in previous books.

So where does that leave us? Well, it leaves the world notably lesser for his passing. His daughter Rhianna is a writer (most notably she wrote the 2013 game Tomb Raider, which I also thoroughly enjoyed). I'm sure if you even glance at the internet today, it will be filled with Pratchett's quotes, a tribute to a great man. I'll leave you with my favourite quote of his. Not the funniest, but the one that I read when I was only 10 years old, and it changed how I saw the world in an instant:

"I don't know enough words, he thought. Some things you can't think unless you know the right words".

Buzzfeed: 26 Discworld Quotes About Life, The Universe and Everything

The Guardian: Terry Pratchett in quotes: 15 of the best

The Guardian: A tribute to Terry Pratchett: your reviews