Usage and impact of academic support, with Jennifer Lawrence UNE Jennifer Lawrence: I'm going to talk about a study that started from my personal curiosity.

My role at UNE involves management of both our internal academic skills support area and the Studiosity external support and a number of other student academic support services. And I started getting questions from various elements of the university around things like a business case for renewed contracts. What was the efficacy of various programmes?

And so I started looking into data, as I'm want to.

Looking at the particular nature of student support at uni, there were a couple of areas that I was particularly interested in. We have external support services such as Studiosity. We have our internal academic skills support, which is one that I oversee the Academic Skills Office. We do have some peer tutoring programmes. These are quite limited at the moment. But we're developing and we have some support programmes we call Restart and Prep, which are about reaching out to students either in the early stages of their studies or to get them reconnected with their studies later on. 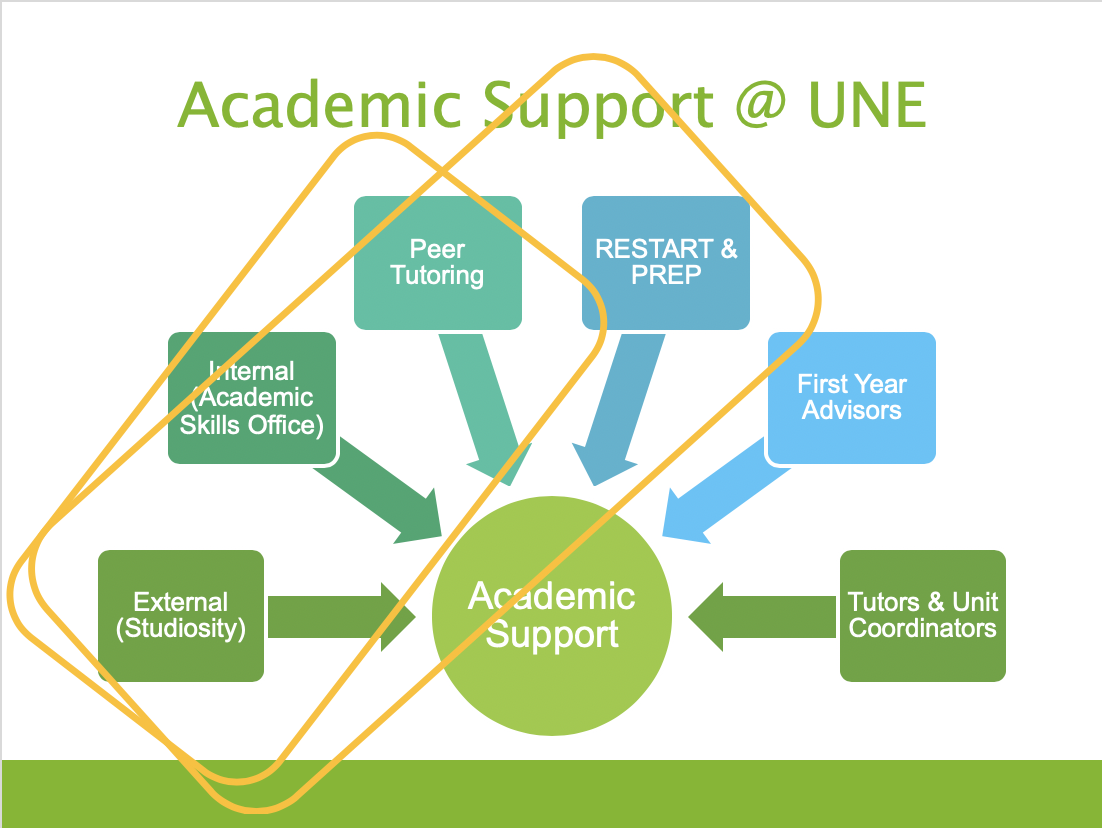 And so in the context of a study like this, I'm looking particularly at generalised academic support, particularly the first two, and really wanting to examine from an internal perspective what the impact of those services are:

Who's using them?
What impact it has on this success?
What is their attention across multiple trimesters?
Are we making an impact?
Are these services useful to our students?
Are they just reaching the students who would succeed anyway?
Are we actually making a difference?

So that's kind of where I started out.

So one of the first things I noticed when I was looking into this and the first thing that really caused me to go down this road was when I looked at the data, I noticed that there was only a very small group of students who accessed both services. So generally, students either accessed Studiosity help or they accessed academic skills. They didn't tend to use both. 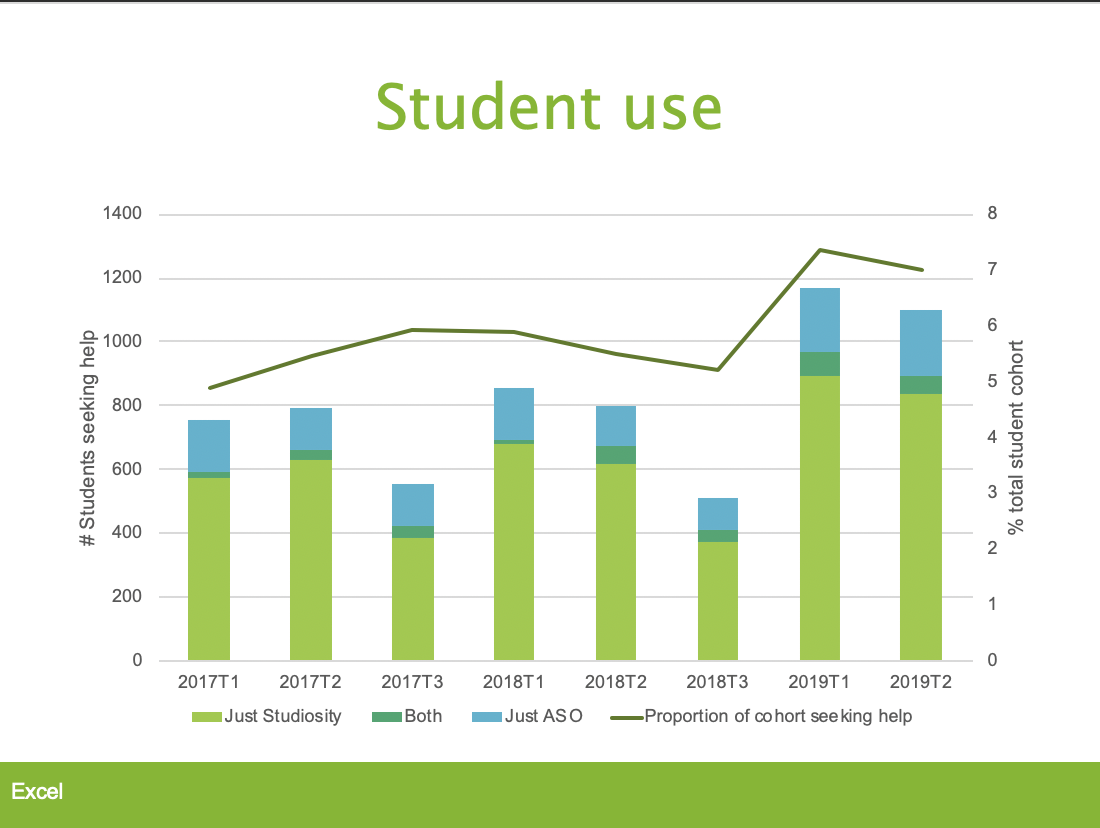 And that was that really the first point of curiosity to me. I wanted to know why that was what what was it that was influencing their patterns of seeking help from support service? Was it pragmatic reasons? Were they feeling like one was more accessible to them?

So we see these subtle differences in the cohorts emerging.

And again, only a very small proportion of these students were switching services between trimesters or within trimesters. So they tend to pick one and then stick with it. They tend not to shop around.

So I wanted to know the reason students give for these choices. So I got responses from around 780 students at uni - or around five percent of our active cohort at that time.

And what really surprised me, is that students are mostly pragmatic.

That is, a lot of the findings at other institutions had been that students would act on friend or peer recommendation. Whereas with our mature online cohort, friend recommendations were not really a factor for them.

However, their previous experiences with a particular support service was important. Their awareness, the timing. So they're making choices based on very pragmatic factors, whether they thought the support was easy to use and navigate.

They didn't really care too much whether it was an internal service provided by uni staff or an external service. I thought that would be a bigger factor than it was.

And they didn't really care too much whether it was something that was focussed on subject material or more generalised academic support that tended to vary a little bit depending on what particular help they were seeking.

"So students are quite pragmatic in their choices, influenced by practicalities of time and accessibility."

And we know that the peak usage times of the Studiosity service and the times when they email into the academic skills office asking for written feedback tend to be about nine o'clock at night. And that seems to be when the kids are in bed after dinner, when everyone's gone to sleep. I'm going to sit at home and do my study at that point in time, and that's particular to that mature cohort.

And so this was using what's called a one way ANOVA test and analysis of variance. For those of you who may not be as statistically aware and this test essentially looks at the main approach across different groups of data and says, is it significant? Is the other differences between these two sets of numbers statistically significant? And you can see from the graph here already. "Yes, they did seek support" are in red. The "No, they didn't seek support" are in blue. And you can say just by looking at it that the red ones look higher. 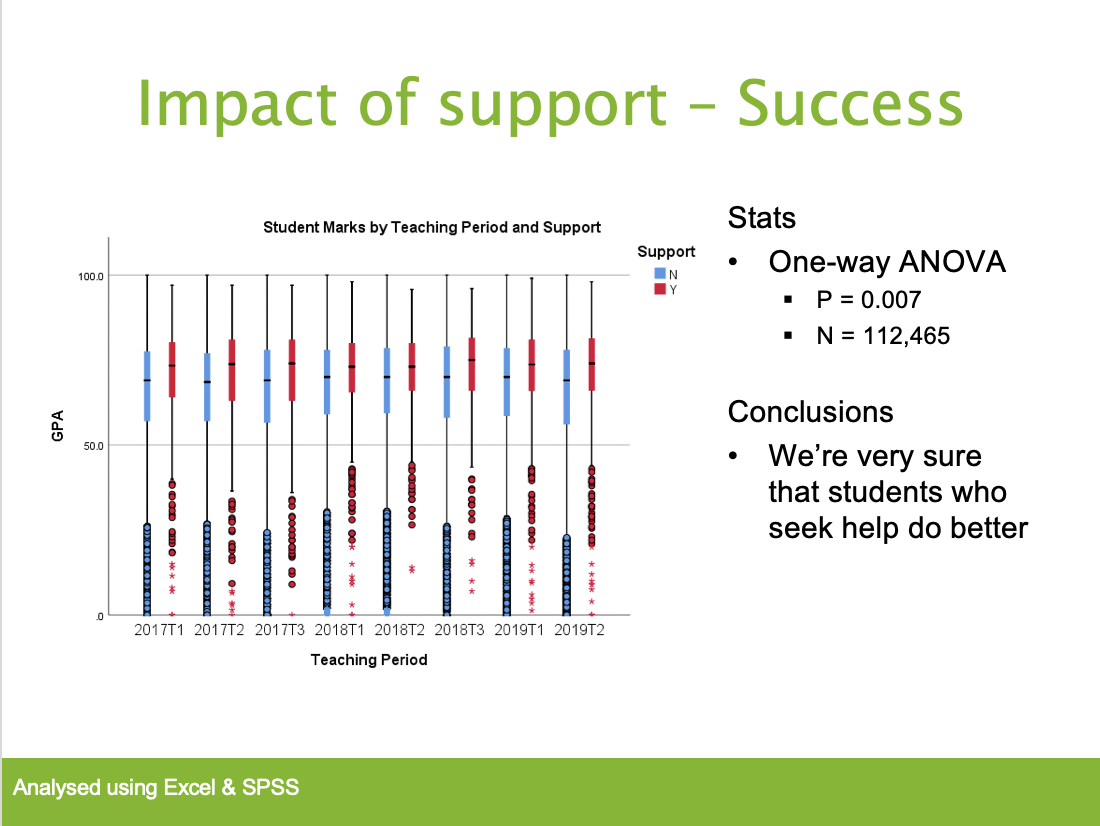 So we can kind of eyeball it and say this looks pretty good, but eyeballing it isn't quite enough for me. So I ran the ANOVA test and in this case I was looking at over 100000 students. One hundred twelve thousand four hundred sixty five set that in n-number of sample size. And ultimately, the bigger sample size that we're looking at, the more confident we can be with the results.

"So we can kind of eyeball it and say this looks pretty good, but eyeballing it isn't quite enough for me."

In statistics, we look for a P value of less than point O five. So that normally indicates that there's a 95 percent chance or greater that the difference in grades is because of help seeking rather than just coincidence. And in this case, we got a P value of 0.007. So it's quite significant. Essentially, that means that we can be very sure that students who seek help do better.

"And in this case, we got a P value of 0.007. So it's quite significant. Essentially, that means that we can be very sure that students who seek help do better."

We know that students who seek support are more likely to be successful. It's positively correlated, but particular kinds of support aren't particularly making the difference there. It's just if they seek help, they do better. It doesn't really matter where they seek help from. And that, I think, for me, was really impactful.

There's a lot of conversations that take place at institutions around different types of support, particularly internal, external support. And what we're seeing here is that they don't tend to matter, that the impact on student grades particularly will be consistent across those if they're seeking help, regardless of where from, then they will do better.

Looking at 80,000 samples, I did a binomial test. Looking at persistence into one or two trimesters into the future was 0.03. So that's significant, but it's not quite as significant as what we saw previously. So we're reasonably sure that students who seek help are more likely to persist with their studies. Whereas with the previous tests, we were very, very sure that students who seek help were going to get higher grades.

"So we're reasonably sure that students who seek help are more likely to persist with their studies." 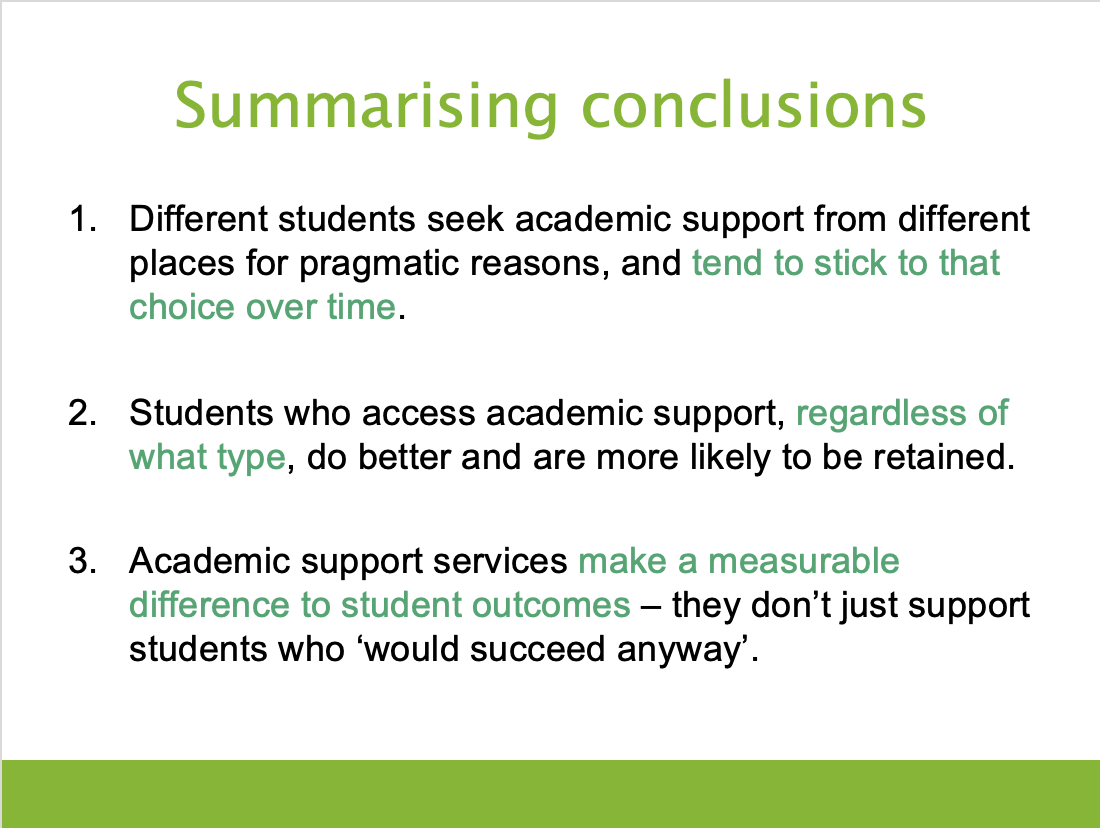 You can watch Jennifer's presentation or download the slides, here.

Or catch up on this year's Symposium sessions.