Dialogue and dinosaurs: A critical analysis of Jurassic Park

If the text you are analysing is a movie, one of the things you're probably going to look at is dialogue.  As well as being the primary mover of the plot, what a character says, and how they interact with other people, is one of the easiest ways to develop, and then communicate, a character to the audience.

Our Tutoring Services Coordinator, Fiach Smyth, shares his critical analysis of one the scenes from Jurassic Park, and shows how you analyse dialogue in a film - something which a lot of students struggle with.

Typically dialogue involves more than one character and is usually presented as discourse - a conversation.  However, this isn't always the case.  For the majority of 'Cast Away' Chuck Noland talks to himself, or to Wilson, a volleyball with a face painted on it.  In a movie with essentially one character, dialogue, rather than being sidelined, is critically important to the success of the story.

However, there is one line of dialogue that I consider to be the greatest in modern cinema, and it's not between two people, or even between a man and his volleyball.  It's only two words long, it's a man talking to a dinosaur, and it is awesome.

The original Jurassic Park is an objectively great movie.  It was a commercial and critical success, and its clever and pioneering blend of CGI and physical effects had a profound effect on how movies looked for over a decade after its release in 1993.  It had a compelling story and a solid cast of great actors.  It was full of memorable scenes that have entered our collective pop culture consciousness, but for me, no scene in that movie is more memorable, or more perfectly executed, than the death of Robert Muldoon.

Muldoon was the gruff, no-nonsense, veteran hunter who was appointed by Hammond as Warden of Jurassic Park.  Throughout the movie, a lot of effort goes into showing how competent and experienced he is. He speaks plainly, and calmly; he is focused and deliberate, a precise man who knows exactly what he is doing.

In Muldoon's final scene, he knows there is a velociraptor outside the bunker and so he steps outside, to hunt it.  This scene is meticulously crafted, and really great to analyse.  We see a close-up shot of Muldoon's face, his eyes sharp and focused, his brow dripping with just a few beads of sweat; he is both absolutely confident in his abilities, and afraid, at the same time.  We see a shot of him stepping delicately through the undergrowth, making barely a noise.  We see close-ups on his hand and his gun, as he unfolds the stock, carefully, methodically, snapping it into place with a quiet, definite click.  Every movement is precise and considered.  No dialogue is necessary to communicate any of this.  The composer selects very specific close-up shots, which has the effect of making Muldoon's actions appear systematic, and controlled.

The is no talking, no incidental music.  Nothing but the click of the rifle being fitted, the slight movement of the trees, and, just twice, the sound of a strange, alien insect in the distance.  Tense and unsettling.

Muldoon sees the raptor through the trees ahead of him, its face partly obscured by ferns.  We get a close-up profile shot of his face as he takes aim.

Then, beside him, at the background of the shot, a movement in the trees.  The face of a second raptor pokes through the prehistoric foliage.  Muldoon turns to look.  Now the incidental music kicks in, with a deep, dangerous bass note.  Something is about to happen.  Something bad.

After a scene with no talking, and almost no noise, Muldoon says only two words.  Because of the way the scene has been constructed, those two words stand out to us.  They are important.  Muldoon doesn't need to scream, or yell.  He, in a quiet, breathy voice, says just two words:  "Clever girl". 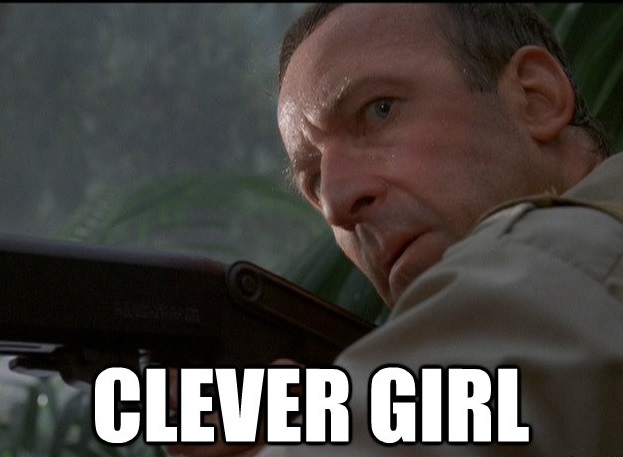 This line of dialogue, paired with the incidental music, foreshadows what's about to happen.  After a few seconds' pause, while the audience is processing the situation, the raptor bursts from the trees and kills Muldoon.  'Clever girl' is Muldoon admitting defeat, acknowledging that the raptors have him.

These two words also summarise Muldoon's entire character.  He knows he is about to be killed, but he doesn't yell, he doesn't scream, he doesn't panic.  He assesses the situation in a calm, methodical way, understands the outcome, and accepts it.  He isn't angry; if anything, he shows his respect for the raptors, that they were able to out-hunt him, the veteran hunter.

This single line of dialogue not only underlines the character of Muldoon, it also sets up the rest of the movie.

Referring to the dinosaur as 'girl' is a kind of personification, in this case, used to elevate the animal to the status of a person; 'Clever girl' is an acknowledgement that this animal is Muldoon's equal and, because Muldoon has already been established as a veteran, experienced, very competent hunter himself, the implication is that the raptors are the equal of any human.  And the reason for this equality is that the raptor is 'clever'.  The T-Rex may be an enormous, slavering monster, a wrecking ball of muscle, teeth and killer instinct that has been shown wreaking devastation and murder, but the raptors have an intelligence that makes them, in this situation at least, on par with, or even more dangerous than, other dinosaurs, and us.

These two words of dialogue in this short scene have told us that velociraptors are hunters, as competent, as methodical, as tactical and as intelligent as we are.  The most tense scenes in the movie follow, with the children being hunted through the museum by these creatures that have been elevated, in the minds of the audience, from 'just another dinosaur' to 'the most dangerous dinosaurs in the movie', all thanks to that one scene, and those two words of dialogue.

"Clever girl."  The greatest line of dialogue in modern cinema.

If you need help with your essays or assignments, connect with one of our expert English Specialists now who can help.