What's The Deal With Gravity Falls? A Parents Guide

Gravity Falls is a show about two kids, Dipper and Mabel, who’re sent to spend the summer with their Gruncle (great-uncle) Stan. Stan is a loveable but dubious man, operating a tourist trap known as the “Mystery Shack” in the town of Gravity Falls. The entire show is set within the town and its outskirts, making everything quickly feel familiar.

The protagonists of our story are the 12-year-old twins, Dipper and Mabel. Dipper fancies himself an intellectual, with a more restrained and cautious personality, while Mabel embraces the world with her own brand of contagious, enthusiastic joy. This dualism is central to much of the enjoyment of Gravity Falls, as each twin reacts to situations and overcomes challenges in their own way. Neither is shown as being better or more central to the plot, and each has their own triumphs and failures. 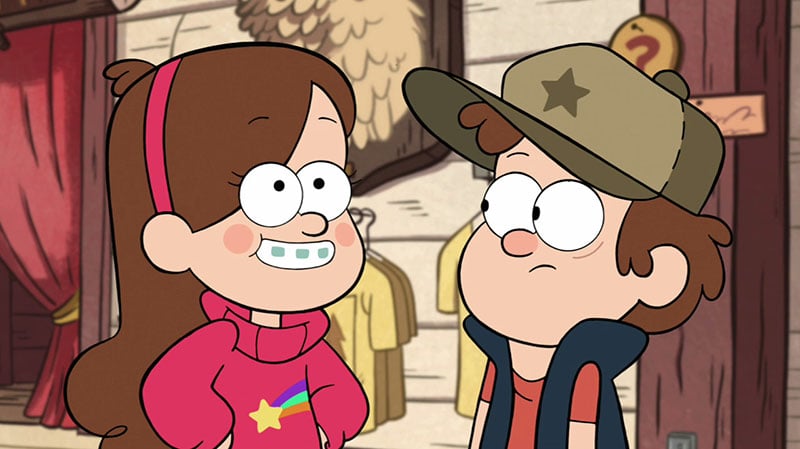 Neither is the “main” character, and both are instantly charming.

In the first episode, Dipper discovers a strange journal, detailing the many mysteries of Gravity Falls. Here the show shines as a kind of “X-Files by way of Disney”, as most episodes have the kids resolving some supernatural phenomena, be it ghosts, robots, or a plague of marriage-obsessed gnomes. The show also has a longer arc spanning its two existing seasons as Dipper and Mabel try to track down the author of the journal, and to try and get to the bottom of the mystery of Gravity Falls once and for all. I won’t spoil it for you, but the finale of season 2 is a real rollercoaster, calling on every element of plot and characterisation the show’s established.

As for themes, friendship and brother/sisterhood are the main ones. Dipper constantly tries to ingratiate himself with the local teenagers, while Mabel befriends the uncool kids of her own age, with a warmth and love that’s played straight, because that’s the kind of girl Mabel is. Dipper’s crush on an older girl named Wendy is discussed and resolved, as Dipper slowly matures and learns to see things from other points of view. Mabel, on the other hand, falls in and out of love at the drop of a hat, but has an emotional maturity that Dipper lacks.

The relationship between the siblings is also one of the most plausible and realistic I’ve ever seen portrayed. They laugh, they fight, and they make up. They’re each their own people but are bound together by the bonds of family, and each is willing to sacrifice much for the other’s safety and happiness.

The tourist trap itself, filled with Gruncle Stan’s creations. For all the real mystery in Gravity falls, the shack sure is filled with a lot of fakes and junk.

The town and the world itself are also populated by many funny and interesting background characters. My personal favorite is Soos, a 21-year-old who works at the Mystery Shack. While not terribly clever, he loves Gruncle Stan and the kids, and helps out in many of their adventures. We see glimpses into Soos’ life, and it’s not a happy one. He has no parents or money, and few friends, but he puts on a brave face and tries to get as much out of life as possible. It’s the little touches of tragedy and realism that make Gravity Falls so compelling.

In summary, Gravity Falls is a great show for kids of all ages, and with little violence and no objectionable themes. There are dinosaurs and time travellers and love and plot, and it accomplishes all of this is neat little twenty-something minute episodes. Start at the first episode, and work your way through, you won't regret it.